i know…i had no idea they existed either.  but do you ever get the feeling the universe is conspiring to send you in one direction?  when “the watchman” (i am not linking to it – the website is loud!) was first in previews, i remember telling the hubs i had never heard of a graphic novel, and had no idea what it was.  he explained it as a sort of comic book of novel length.  at which point, being the superior, literature-degree-holding, chick-lit-reading, highly sophisticated (ha!) writer that i am, i scoffed.  must be a boy thing, i said.

but later, i recalled a couple of wonderful books i’d recently received that i could only describe as ‘graphic novels’, though there’s nothing comic book about them.  i’d originally requested michi’s like i give a frock (utterly, thoroughly fantastic!) and jane rocca’s the cocktail (i love this one mostly for the art, but it would be the perfect addition to any single girl’s bar) because i was dying to check out kat macleod‘s gorgeous artwork (a very, very worthy endeavor – her illustrations are amazing).  but these books…it’s hard to explain, but they’re more than just illustrated novels.  the illustrations really add to the content, and the book definitely wouldn’t be a book without them.  like i give a frock is a fabulously cheeky take on fashion “dictates” – and when you add in macleod’s fab illustrations and the old-school typography, well, i just want to pull pages out to frame.

from there, i saw a blog post about a couple of other “graphic novels” about travel.  i simply can’t resist a good travel book, and the graphic trend was becoming pretty evident.  so, before i knew it, a year in japan and french milk appeared in my mailbox.  readers, these books are simply beautiful!  rather than the ‘comic book’ vision i had, these read like a journal – literally as if someone’s moleskine notebook was published as-is, in their own handwriting and with all of their original thoughts and observations.  french milk, by lucy knisley, chronicles a mother and daughter’s six-week trip to paris and, while it does have a slight comic book feel, the content is sweet and endearing.  and the drawings (and occasional photo of mom and daughter) are such a fun addition that the end result is just thoroughly charming. 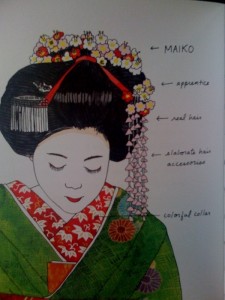 (from a year in japan)

and if you’re anywhere near as fascinated by asian culture as i am, a year in japan is a must-read.  it chronicles author kate t. williamson’s year spent in japan to study design.  i knew it was love at page one, when williamson sketched four elaborate squares of cloth, then went on to explain they were washcloths she spotted in a department store window display her first day in kyoto.  in japan, she explains, women carry these in their handbags to dry their hands in public restrooms, rather than using paper towels.  and so, choosing a washcloth to carry is about design and aesthetic appeal, not just function.  she goes on to describe countless unique cultural details, her experience with them, and all of the beauty she finds in a city i’ve always longed to visit.

so, i am here to confess before you all that i am now a convert to the graphic novel.  you know, provided it’s as well-written and beautifully illustrated as these four are…”the watchmen” is definitely not on my reading list.

what do you think?  will you be giving these a shot??

3 comments on “must read: the girly graphic novel”