looks like my wardrobe isn’t the only one ready to bid this blustery season adieu. readers, i’ve spent the last two weeks in a serious skin crisis. bear with me:

it all started a couple of weeks ago, when i ran out of my beloved skyn iceland cleansing cloths. it seems like such an innocent mistake now. but i foolishly didn’t order them when i knew i was running low, and by the time i was out, so was sephora’s website. since i was out of options until sephora restocked, i decided to return to an old favorite foaming cleanser, thinking it would work out just fine. readers, i could not have been more wrong. my skin reacted like i’d punched its favorite puppy in the face. i’ve woken up every morning since to a new blemish (or three), and it was steadily getting to the point that i was afraid people were going to start pointing and laughing when i left the house.

as you might imagine, a good (great, really) concealer suddenly became of the utmost importance. as always, i have to try every option ever created in the history of the world before i’ll commit. but when i found laura mercier’s undercover pot, the clouds parted. it’s made up of 3 separate “steps” of concealer…you can use one, two or all three for different types and degrees of concealing needs. on the left is their secret camouflage, which is oil-free and lighter in color, so it works beautifully to cover redness or dark circles. on the right is secret concealer, which has a softer consistency and works more like a traditional concealer (but so much better!). and underneath, there’s a translucent setting powder that you can dust on over the top to cement your concealer into place and help it blend into your skin. i’m telling you…the whole thing is genius, and works so much better than any others i’ve tried, it’s not even worth mentioning the misses. just take laura’s advice and dab, don’t rub…it’s slow, but works every time! 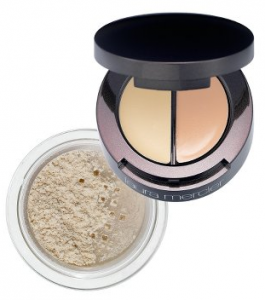 so, now i had the aesthetics under control, but we still had the underlying problem to address. and it was a serious problem indeed. i haven’t had this many blemishes since…well, ever! i skated through high school relatively unscathed in this department, but was starting to feel like nature had finally caught up to me. and i couldn’t figure out why a simple cleanser, especially one i’d formerly adored, could be causing me all this grief. after trying every drying acne remedy i could think of, i decided to go against everything i know, and add moisture to the problem. it’s a terrifying prospect when the issue you’re having is traditionally due to excess oil, but i threw caution to the wind, slathered on a thick layer of clarins hydra-quench cream mask, and crossed my fingers.

twenty-four hours later, my skin’s mood is so improved, i’m wondering if it went out without me last night and got lucky. all that angry redness is subsiding, and for the first time in three weeks, i didn’t wake up to a trio of new blemishes. that, my friends, is serious progress.

it hadn’t even occurred to me that my skin could be producing pimples because it was too dry…the whole concept seems so counter-intuitive. but my working theory is that the combination of switching from a soap-free, water-free cleansing cloth to a full-fledged scrub-and-rinse system, coupled with this ugly winter weather, sent my skin into a dehydration spiral it just couldn’t bear.

a huge thank you to laura mercier and clarins for literally saving my hide. that hydra-quench mask has earned a spot in my weekly skin regimen (a little tip: apply in the shower for maximum absorption). and the laura mercier concealer? well, that’s just never leaving my side. in fact, i’m thinking of buying a second pot to carry in my purse.