So, we’ve talked about beauty resolutions and splurge-y resolutions. But what about a resolution that (at least on its face) won’t cost you a cent? I’m talking about a fashion resolution…one that’s built to help you look your best in 2012 with only a minimum of effort.

Every year, I make a fashion resolution for myself. Just a little something to help me step out of the same old sartorial box, so to speak. My first fashion resolution was to wear more scarves. They’d always felt daunting to me – like I didn’t have that effortless something that consummate scarf-wearers you see out in the world (mostly in Paris) seem to have. But they bring so much color and style to a look, plus they’re just gorgeous to look at. So, I committed to spending a year getting to know scarves. And by the end of that year, I had a healthy new scarf collection (and a mild obsession with Epice). But I also had something less tangible: no more scarf-related anxiety. And that, it turns out, is exactly what that “effortless something” was. Scarf-wearing people just do it. Throw them on without a care, without worrying too much about matching or tying or perfecting, et voila.

The next year it was ankle boots. I hadn’t owned a single pair, but I was intent. And now? Total short boot aficionado – it’s an illness, really. And then, last year was jewelry. Sure enough, by the end of 2011, not only had my jewelry box expanded considerably, but I actually taught myself (well, with the help of certain talented friends) to make a few pieces on my own, which has proven to be immensely satisfying, in that “Told you I could do it” sort of way.

The key is to keep it small, and specific. Pick one particular thing you’d like to do better in your sartorial life, and decide to make it happen. Are you envious of a friend who always has the most stunningly creative up-dos in her hair (Kim Brandt, our style-savvy new columnist is one such person for me)? Commit to wearing your hair up more in 2012. Are scarves still scary for you? Trust me – they’re not. Resolve to give it a try.

As for me, my BFF has mentioned on more than one occasion that I might be a little too reliant on denim in my wardrobe (I believe her exact words were something like “I can’t remember the last time I saw you wear something other than jeans.”). My initial reaction was that she should be glad I wear anything other than a ratty tee and yoga pants, given the fact that I work from home 90% of the time. Plus, the chasm between denim and work-ready trousers is deep, and mighty hard to traverse (khakis? cropped skinnies?). But after the initial defensiveness wore off, I gave it some more thought. Why not branch out a bit? Sure, denim is wonderful, and I have no intention of banning it from my closet. But maybe I could try a few alternatives, and see what happens. It’s worth a shot, surely.

All this to say that 2012 may well be the year of the pant. A few ideas that are already brewing in my head: 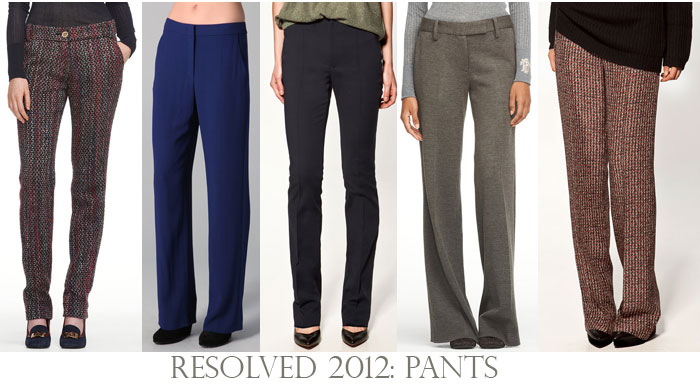 (Do you like how I used the fancy graphic to turn this into an “Official Resolution”? Mind games – I tell you, they work.)

I’ll keep you posted on this little experiment, naturally. But in the meantime, are there any fashion resolutions you’re thinking of undertaking? The “Year of the Tiara” perhaps?

One thought on “resolved: branching out”