{Editor’s Note: I’ve been saving this one. I’m pretty obsessed with Michael Ruhlman’s latest cookbook, Ruhlman’s Twenty, but knew I’d never attempt most of his fantastic ideas. So, I recruited a serious foodie – my dear friend, A – to do my dirty work. She also happens to be an amazing photographer, and uses words like “penultimate” in everyday conversation. You’re going to love her.}

Hi all! I’m here to talk about Michael Ruhlman’s Twenty…also known as “How To Impress Your Friends By Making Your Own Cured Salmon”.

I am a longtime fan of author Michael Ruhlman. What’s not to like? He’s friends with Anthony Bourdain, advocates roasting chicken at home as a way to share some, uh, special time with your paramour, and even has his own apps to help you learn how to bake bread. Using your smartphone. Of course.

Ruhlman also collaborated with Thomas Keller on several of Keller’s cookbooks, in addition to numerous other books Ruhlman has authored on cooking and the art of cooking.

Given the detailed and complex recipes for which Thomas Keller is known, it might surprise you to learn that Ruhlman is not actually a fan of recipes as a rule. Indeed, Ruhlman’s penultimate book, Ratio, focuses on easy-to-remember basic ratios for some of the most popular items in American kitchens. For example, cookie dough? If you’re like me and you ripped open the Toll House chocolate chip bag right across the recipe, you needn’t fret if you simply remember Ruhlman’s ratio of 1 part sugar to 2 parts fat to 3 parts flour. Thus, when Ruhlman released his latest tome, Ruhlman’s Twenty, I was interested to see what he would teach me next in his quest to convince America to learn how to cook without a recipe.

Twenty is organized by twenty techniques and ingredients that range from Onion to Egg to Braise to Fry. Initially, I didn’t think I’d learn much, but I was surprised. In the Salt section, Ruhlman points out that when making vinaigrette (ratio: three parts oil to one part acid, like vinegar or lemon juice), salt doesn’t dissolve in fat, so it’s best to mix the salt with the acid so that you don’t have grainy salad dressing. Brilliant! Similarly, Ruhlman’s technique for roasting chicken (um, in the Roast section) means that this once intimidating meal is now a weeknight staple at home that even my husband is willing to make. It’s as easy as:

And it works, every time.

After poring over Ruhlman’s Twenty, I was especially curious to try his technique for citrus-cured salmon because it sounded fancy, not too hard, and had helpful step-by-step photos to show what to do. First, I zested a couple of lemons, a lime, an orange, and a grapefruit: 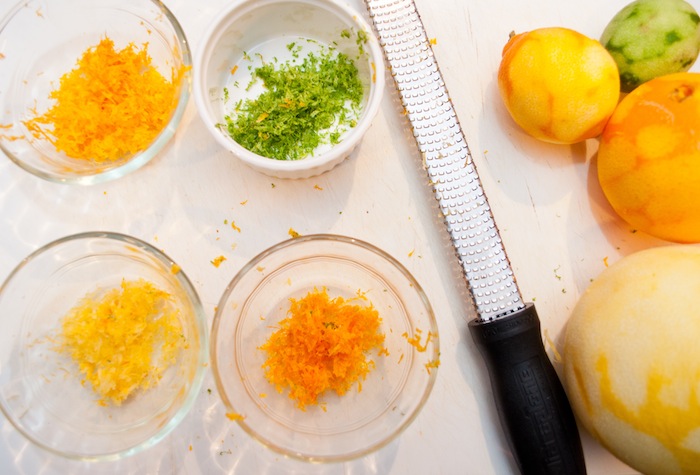 Then, I combined 1 cup of kosher salt with 1/2 cup of sugar, and spread about a third of the mixture on a piece of foil. I placed my 1.75lb piece of salmon on the foil, skin-side down, and covered it with all four types of zest. Next, I dumped on the rest of the salt-sugar mixture: 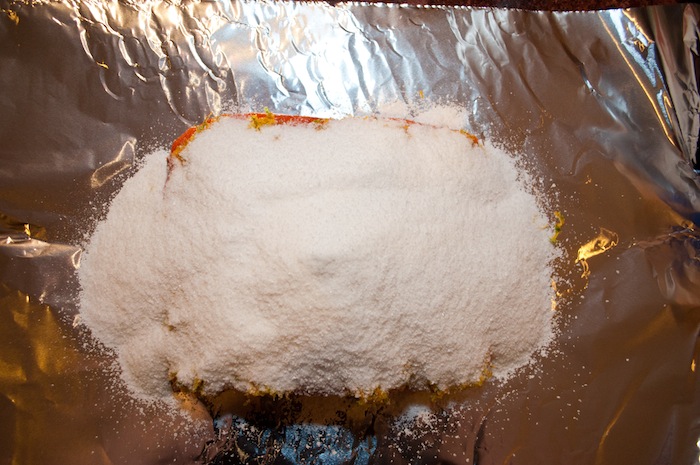 I folded up the foil to contain the salt and sugar, and then placed a second piece of foil on top and wrapped the pieces together snugly to prevent leaking. I put the salmon into a dish, and placed a weighted baking dish on top of the salmon to encourage everything to get happy together. It stayed in the fridge for 24 hours. 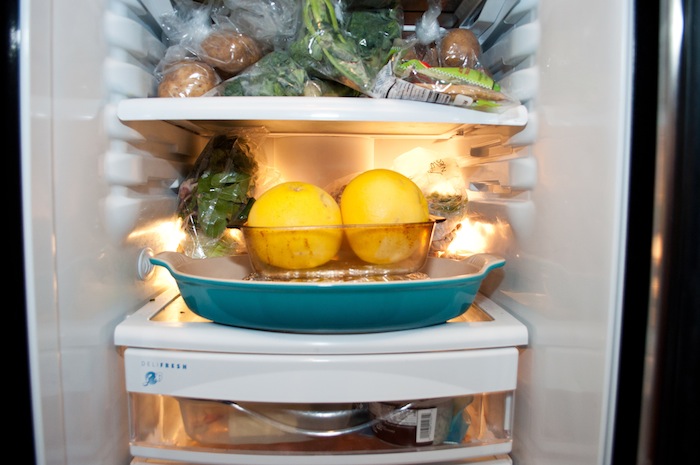 (Why, yes, that is some of my zested fruit weighing down the dish. You may also use any canned goods you have lying around).

After a day passed, I pulled the salmon from the fridge and rinsed off the salt and sugar. I lined my baking dish with paper towels, put the salmon back in, and covered it all with foil to sit overnight to further dry.

The next morning, I pulled the salmon back out and sliced some thin pieces to create this delicious breakfast for myself:

I had friends over later in the day, so I followed Ruhlman’s suggestion and diced some shallot, mixed it with some creme fraiche and a pinch of salt, put a dab of the mixture on sliced cucumber rounds, and topped it off with a small piece of salmon: 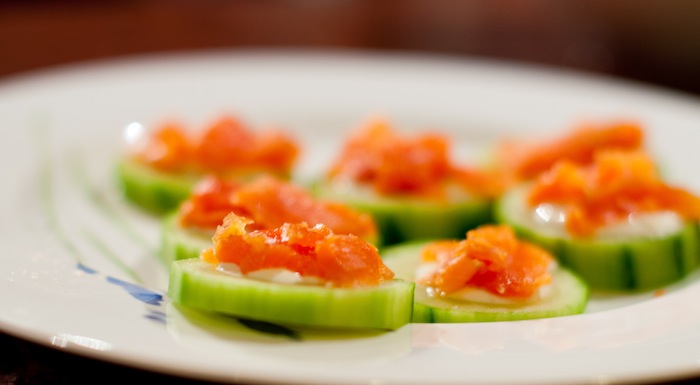 Not only does the salmon look pretty, but I also earned some major foodie cred when I revealed that I actually cured the salmon myself, instead of relying on my usual sous chef, Trader Joe. And the kicker is that it takes hardly any effort at all: salmon is available almost everywhere, and citrus is in season right now.

Next time, I am going to track down some fresh pork belly and try Ruhlman’s take on DIY bacon. Wish me luck! — A.