First, let me say that summer reading is my kryptonite. I shouldn’t even be allowed into a bookstore this time of year. It’s the literary equivalent of Oscar season…positively the best time of year for fiction-lovers like me. To wit, an actual photo of my nightstand at present: 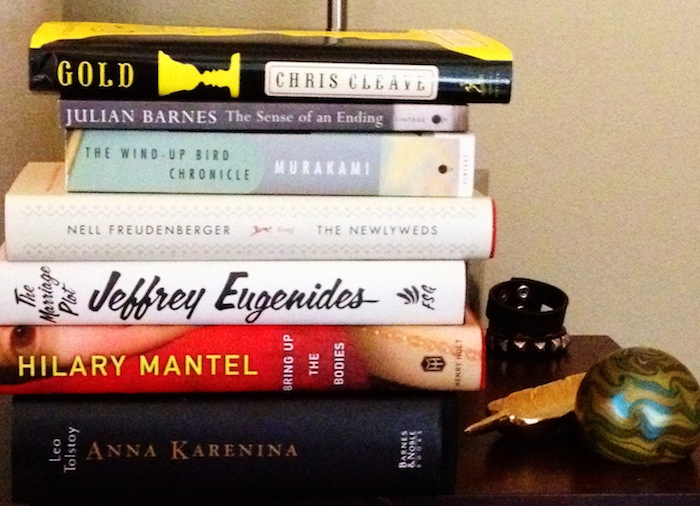 And that’s not even the half of it, friends! But it is a good sampling of what I’m most excited about reading this season. Some I’m halfway into, others I’m still anxiously waiting to start, but I thought I’d share my thoughts on a few of the books that are keeping me up nights.

Bring Up the Bodies (Hilary Mantel): You know how I love a good period drama, especially when the Tudors are involved! Hilary Mantel tackles the legendary story with so much authority and detail (and from such a unique point of view), it’s hard to believe she wasn’t there. This is the follow-up to her Wolf Hall, which won accolades from every direction. Not being a huge fan of Thomas Cromwell (the subject of Wolf Hall), I skipped that one…but Bring Up the Bodies is all about Anne Boelyn’s fall from grace, and I’m riveted. Give this one 15 pages to get going, and you won’t be able to put it down.

Anna Karenina (Leo Tolstoy): I’ve never been a lover of Russian literature (I know it’s cold, but must we be so dreary and serious all the time?), so although I was supposed to read this back in one of my undergrad lit classes, I (predictably) faked my way through. With Keira Knightley’s movie version coming out later this year, I thought I’d finally tackle this tome, but halfway in, I’m giving up. I know this is the digital age and my attention span is only slightly larger than Keira’s tiny little waist, but things are moving at a snail’s pace, and Anna is frankly starting to annoy me. Anyone want to make a case for Mr. Tolstoy before I throw in the towel?

Gold (Chris Cleave): This is the third novel from Cleave, who you’ll remember from Little Bee. The novel centers around two young women competing in the Olympics, so if you have a serious case of Olympic fever, this is a title you shouldn’t miss! I’m woefully un-Olympic, but I’m still finding this utterly riveting from page one. It’s about sports, sure, but mostly it’s about competition and friendship, and how the two intertwine. I couldn’t put Little Bee down, and I see I’m up for more of the same from Gold.

The Sense of an Ending (Julian Barnes): I picked this up solely on Nichole’s recommendation…she posted a photo of the first page, and she’s right, it’s enough of a start to get me really excited about the rest of the book. Take a peek, and see what you think.

The Newlyweds (Nell Freudenberger): I’m only a chapter in, but Nell Freudenberger can do no wrong in my eyes (see eg, Lucky Girls). This tells the story of a mail-order bride’s life in Suburbia, and I’m expecting great things.

What are you reading this summer?