It’s the last week of the “Savage Beauty” exhibit on Alexander McQueen at the Met, and I’m absolutely beside myself about missing it. For those of you in NYC, I really hope you’ve all been able to go…and don’t tell me how amazing it was, I’m already jealous enough.

For the rest of us, I’ve found a little something that’s much less expensive than a trip to Manhattan, but will still give you an indelible impression of the exhibit. For $45 (less if you’re a member), you can pick up the Met’s catalogue of the exhibit from their online gift shop, and it’s utterly beautiful. It’s an oversized, hardbound catalogue of such style and substance that it bears almost no resemblance to typical museum exhibit memorabilia. It’s brimming with images of nearly every look in the exhibit, as well as images of the rooms and displays, and commentary by the curator, Andrew Bolton. The cover, a hologram of McQueen’s face, imposed over a metallic skull, is a perfect reminder of the 3D Kate Moss hologram in the exhibit (see the Widows of Culloden video here for a closer look).

Stunning, isn’t it? If you’re at all interested in the history of fashion (as I obviously am), this is a tome you’ll want on your shelf. Moreover, I’m guessing the publisher won’t be reprinting this once the exhibit’s over, so it’s worth buying now while you can.

i have a family wedding to attend this spring, and i’m dreading dropping serious change on a dress that i’ll wear once and will then wither at the back of my closet.  instead, i’ve been thinking about the value of separates.  picking up a formal skirt that can be repurposed in any number of ways feels fresh, but it also feels smart.  i’m thinking that this skirt from the rodarte/opening ceremony collaboration might be an absolute necessity. 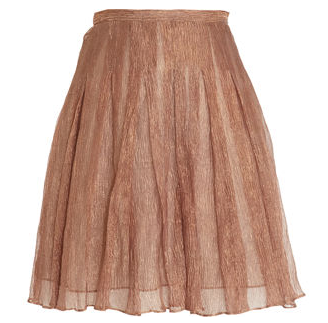 sure, at first blush (sorry, i had to…), this looks a little formal for anything but an evening event.  but bear with me: 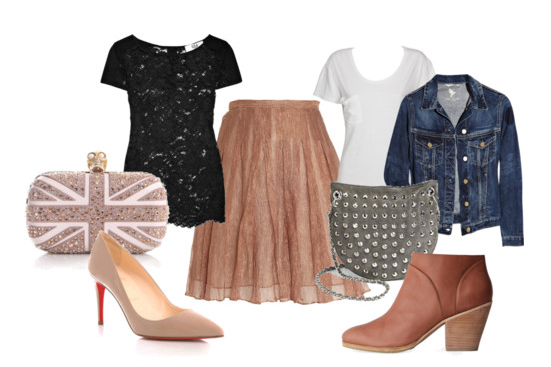 on the left, we have the wedding-guest ensemble…pitch perfect for any non-black-tie wedding, i think.  but i’ll have endless options to restyle that skirt and use it all year long.  that stunning blush shade, tinted with gold metallic, is pitch-perfect for warmer weather, and the semi-sheer, floaty crepe gives this a beautiful shape. it’s a little short, particularly for a knee-showing-phobe like me, but i’m thinking if i size up, it might just work.  and the pricetag ($325) doesn’t feel that out of the budget realm for a special event…after all, i’d pay that much for a dress, i’m sure, and the skirt is endlessly more versatile.  it could so easily be paired with a sleek black top and nude pumps (and maybe that sweet little bow belt?) to make it event-worthy, or a simple nude tank for cocktails, but it will also be amazing for day.  the trick is to keep the rest of the look simple and ultra-casual – let the skirt steal the spotlight.  add a white tee, denim jacket and perhaps some rachel comey booties, and you’re set!

i think it’s a day worth mentioning when the weight on your driver’s license is no longer a lie…and may even, in fact, be a bit of an exaggeration.  amazing stuff, really.

for those of you on new year’s resolution diets, i don’t recommend my method of weight loss (nor do i think it would be possible unless you were lucky enough to contract some sort of rare south american tapeworm), but there is definitely some excitement involved in going down a size (or two…).  at this rate, i might even be able to wear mcqueen by the end of the year.  because, you know, size is the only thing standing between me and a $2,000 blazer.

in more realistic retail therapy news (see? you said you wanted more frugal finds – it’s like ‘i dream of jeannie’ in blogland), i happened on the rodarte for target collection on last sunday’s target trip, and ended up bringing their navy lace tee home with me: (hmm, maybe my new hobby should be learning to take photos that don’t suck…)  it’s sold out online, but if you happen to spot one in the store, it’s a worthy buy, which is saying something, as i’d more or less given up hope on the entire target/designer collab thing after so many misses of late.

but lacy lingerie is everywhere for spring, and if i can nail the look for $16.99, i’m a happy shopper.  the layering options are endless – over a dark tank and under a cardi, under a summer dress, peeking out under a v-neck sweater or a menswear vest…you get the idea.  (i actually did take a photo of the layered look, but it makes the first one look like ansel adams.)  sizing was a little on the narrow side…buy like you’re buying juniors, and you’ll be safe.

with that, i’m off to take a few highly invasive medical tests.  but i have brownies waiting for me when i get home.  so that’s something.