{editor’s note: an almost entirely photo-less post…how boring!  but really, how many photos of mascara tubes and eyelashes covered with mascara do you really want/need to see?}

is there anything that inspires more trauma than the words “they’ve discontinued my mascara!”?  not at my house.  after years of faithfully buying neutrogena’s clean lash tint, it’s just vanished from the planet, and i find myself utterly heartbroken.

after an acceptable mourning period, i realized i was going to have to dry my mascara-laden tears and find a new love…and fast.  and so, i started requesting samples (membership has its privileges).  but if i was going to risk heartbreak again, it was going to have to be perfect.  like any red-blooded woman without real problems in life, i have a long list of “musts” for my mascara.  it must go on smoothly, with absolutely no clumping or spider lashes.  it must coat lightly, without really looking or feeling like i’m wearing anything – i’m not a person looking to double my length, triple my volume, or “million-ize” anything.  i just want my lashes to stand out a bit.  last, it must come off at night with little to no additional effort on my part. because i am lazy.

dear readers, i now sit here typing before you with a bag filled (filled!) with mascaras.  the good news?  i’ve found a new love, baby.  and a couple of backups, just in case this new mascara cancels our saturday night plans at the last minute.

but first, should i tell you about the ones that failed?  naturally.  this shall not be an exhaustive list, as we’d be here all day.  but a few highlights are definitely in order.

giorgio armani’s soft lash mascara (which i now can’t find in any color) was my hands-down favorite for a month, until my overly sensitive eyes took something it did personally.  now, i can’t use it…which is an utter shame.  in fact, i finally had to throw it away, because even having it near me when i apply others is too tempting…it’s that lovely.  if you have normal sensitivity levels, i can’t recommend it highly enough.

benefit’s bad gal lash, with it’s bigger-than-life brush, came next.  sadly, it was much more mascara than i was looking for:  too clumpy, too clingy, and there was just too much product going onto my lashes with every brush stroke.  plus, it requires some sort of high-level technical equipment to remove.

next, i started playing around in the clinique pile.  spoiler alert: in the end, a clinique option made my top tier list.  but in the beginning, there was lash power.  and oh, how it clumped.  also, they aren’t kidding about 24-hour wear – it’s the mascara equivalent of a stalker ex.  and then there was high lengths, with a brush that scared me a little bit.  weirdly thin, more of a comb than a brush…it just wasn’t meant to be.

and so, i moved on to origins, where i found several good options.  their fringe benefits covered just the way i wanted it to, adding length and the tiniest bit of volume, without a clump in sight.  but removal was tricky, and i was often left with the dreaded mascara ring under my eyes the next morning.

finally, i decided that with all of these high-end picks, i should give a drugstore brand a chance – after all, my lovely old neutrogena hailed from the beauty ghetto.  and so, i called up the lovely ladies of cover girl, who told me that their new lash blast was absolutely what i needed to try.

and that was how, nearly 20 mascaras later, cover girl won my heart.  lash blast fusion, to be precise.  to be clear, i utterly hate the packaging.  it comes in a pudgy purple tube that makes me feel about 13.  but all of those “musts” i mentioned above?  yep, it’s perfect on each and every score. 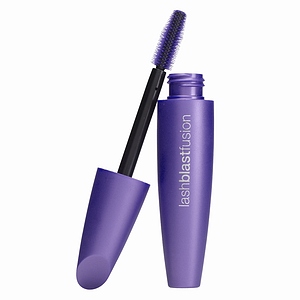 and my back-up dates?  well, first is origins’ full story lush-lash mascara, which did a marvelous job (in fact, it was the winner until i tried lash blast) but it was just the tiniest bit harder to remove (which is probably actually a bonus to many of you).  as for the version that most closely approximated my old favorite?  that was clinique’s naturally glossy mascara, which does a lovely job of just being a mild, unassuming, foolproof mascara with which you can’t go wrong.

so, i’m curious:  are you, like me, a serial monogamist when it comes to mascara?  or do you sleep around?  what’s your current mascara crush?