i’m not quite sure what to say about what’s happening here.  normally, i love just about everything at ron herman.  and, normally, even if i don’t love everything at alexander wang, i can at least see the style and genius in it.  but clearly, something has gone very, very wrong in both houses, and well, i’m a little bit afraid.

that jacket up there?  the blue isn’t denim, though i thought so at first.  it’s suede – but honestly, i’m not sure whether that’s better or worse than denim would have been.  with leather arms.  so, the net effect is some weird denim/leather jacket hybrid thing.  it reminds me of someone’s redesigned vintage store buy, gone very, very badly.

and really, are we doing bras as tops now?  is this some bad seinfeld reference gone awry?  i mean, i will say that the product description calls it “perfect for layering under loose-cut or sheer tops,” so perhaps they’re not fully embracing the bra-as-top concept.  but i’m still pretty scared of the whole thing.

this last one isn’t quite as bad, but it does look an awful lot like another of those redesigned vintage attempts.  i’m pretty sure i owned this blazer in 1987, and donated it to goodwill…where it was apparently adopted by alexander wang, who cut off the arms, and is now calling it a vest.  i’m skeptical.

fortunately, it’s not all fug and fear at ron herman this week.  they do have this lovely new leather ruffle blazer from burning torch.  i think it’s crazy cute, actually, and would adopt it in a heartbeat, if someone needs me to give it a loving home on their behalf.  and these fun plaid scarves from american colors are just the thing to prep up your closet this spring.  see that?  who says i can’t see the glass half full?

are you feeling the fug this week too, or is it just me?

i’ve been wishing and hoping that the massive sale at ron herman would improve to include some fabulous basics, and that day is here.  save 40% on personal faves like decadently warm cashmere from inhabit and demylee, hip outerwear from mike and chris, and amazing fashion finds from haute hippie.

let’s see if i can do this in the spirit of giving.  i’ll be snapping up that gorgeous striped boatneck in superthick cashmere from demylee, now down to $186…for my mom, who is forever complaining she’s cold.  ooh, or maybe that phoeve dress would be just the thing.

for my dear friend who’s vastly more trendy than me, this fleece jacket from citizens of humanity (down to $121) is a no-brainer…especially if she’ll let me borrow it.

and since i’m still desperately lacking in the stunning holiday dress department, i’ll snap up this stunning paillette sheath from haute hippie (down to $360), which will be positively perfect for this new year’s eve…and many more to come.

hey, i can’t be selfless ALL month!

just one little caution – the goodies are final sale, so be sure you love what you’re nabbing.  but really, how could you not?

and of course, don’t forget about all of the other fab deals we have this week:  25% off at gorjana, 15% off at 479 popcorn, a huge 30% off at kate mchale and 20% off at linda & harriett!  with steals this good, how is it possible your holiday shopping isn’t already done?!

if i thought it would actually arrive in time for thanksgiving, i’d order this slouchy brown sweater from b.chyll in a heartbeat.  i love the casual styling, and the earthy tone, and i just know this cozy cashmere would be the ultimate piece to relax in when i’ve completely OD’d on turkey and stuffing…and pie.

plus, if you order a b.chyll sweater from ron herman this weekend, they’ll add on a gorgeous tie dye cashmere scarf gratis (you can see the scarf here).  i do so love freebies! 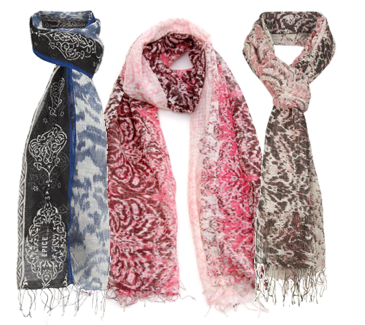 i ran across these stunning scarves by epice in a local boutique recently, and it was love at first sight.  each one is decadently long and warm, feather light, and incredibly cozy…not to mention absolutely gorgeous!  the line was created by a pair of danish designers based in paris and copenhagen, and the photos don’t even begin to do these justice.  truly, i think they’re some of the most beautiful designs i’ve ever seen.  the detail of the patterns is so stunning in person…these really are the ultimate winter accessory, but they’re so light and colorful, you can easily wear them in warmer weather as well.   honestly, i could take any or all home with me right now.

these are nearly impossible to find online (and this from your very dedicated resident internet addict)…but i’ve tracked down a fabulous selection at kate boutique – where they also happen to be having a 20% off promotion right now.  use code october08 and treat yourself to one of these gorgeous pieces…mine hasn’t left my neck since it arrived.

you can also find a few styles at ron herman (here and here)…there’s no 20% off deal, but i think the key is buying the design you love, don’t you agree?

sequins can be a tough look to pull off, unless you’re heading down a red carpet.  but they’re all the rage this season, so when i spied this tank by chan luu ($285), i couldn’t help sharing.  what i really love about it is the amazing versatility a piece this unique brings to your wardrobe, as evidenced by the myriad styling options being shown over at ron herman’s website (one of my all-time favorite resources for creative layering ideas – their stylist is pure genius).

available in walnut (a deep gold) and sheik (my personal favorite – a greenish pewter), this might just be the perfect piece to add a little sparkle to your fall wardrobe.  i love that you can take this piece from denim to cocktails, and with the proper layering (see the center pic above, possibly with a long scarf around the neck), i think you could even rock this look at the office.  or, try using it as a vest, with a sheer white button-down underneath – gorgeous.

i firmly believe in at least one seasonal splurge item to update your wardrobe, and this piece is a perfect candidate.  it’s sure to make all of your basics from last year look brand new, and it’s an easy fix for those holiday parties you’ll be thinking about before you know it.  pick it up at ron herman, and let us know all of the new ways you find to wear it!