I’ve seen two different itinerations of this chevron maxi skirt in the last two days, and stopped in my tracks both times. (In fact, in one case, stalked the wearer across an entire shopping center. Not sketchy at all, right?) Fashion-stalking is always a sign something good’s happening.

Honestly, it’s a toss-up between these two options, the grey/black and the cream/black combo, though I’ll confess to generally raising my skeptical eyebrow (the left one, in case you were wondering) whenever something hails from Victoria’s Secret. But then again, they knock it out of the park occasionally, so who am I to judge?

Whichever road you choose, it’s a no-brainer to style, and a great piece to get mileage out of now but still be able to wear all summer. And it checks in at a very budget-friendly $60.

It usually takes me a while to fall for something that’s really “trendy”. After a youth spent pining obsessively over the latest and greatest shiny new thing “everyone else” had (oh, those Guess jeans, they haunt me still!), I’ve learned that the hotter something is, the quicker it fades…and these days, i’m just too cheap individual to buy in.

Most of the time, this usually just results in me finally breaking down and buying something approximately 5 minutes before it goes out of style. Skinny jeans, for example. But, just this once, I’m thinking of plunging head-on into a trend while it’s still new(-ish). It’s these lovely red trousers I’m seeing everywhere…aaahhh, I just can’t resist! 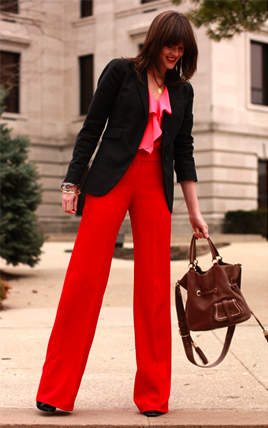 Delightful, aren’t they? Such a perfect shock of color in a sea of bland neutrals in my closet (what? me? winter blues? nah…). And they’re really seasonless, if you think about it. Pair with camel or navy in the winter, and white or pink in the summer…it’s completely caught me off guard to think of red as such a versatile shade, but there you are.

Plus, a friend told me recently she can’t remember the last time she saw me in something other than jeans. And so, I thought…I’ll show her! I’ll buy red pants. But, while skinny versions abound, it’s actually sort of a trick to find the wide-legged variety. (And honestly, I’m just too old, and too curvy, for skinny colored denim. Really.)

Hours of exhaustive searches later, I narrowed the field to two options…and, readers, you’ll be shocked to know I chose the road less expensive. Yes, instead of the $300 Kate Spade version I wanted (gah, now they’re on sale for $200! damn…maybe I should just…no, no, I’ll persevere), I’m going with the $39.50 version from…Victoria’s Secret. 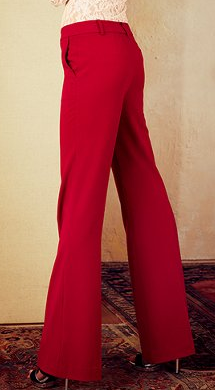 (do you like how I cropped out the top half of the VS model to negate the scary, overly-sexy pose?)

So yes, I’m terrified. I’ve never purchased a single item of clothing from Vicki, and I was totally content with keeping that record intact. But…well, I caved. I fully expect it to be a sartorial disaster, but I’m honestly sort of wildly curious about them, and had to see them in person. Plus, it will make for excellent blogging fodder, don’t you think?

I’ll be sure to report back.