I honestly don’t know whether this is a case of low expectations being exceeded or whether I really loved Istanbul as much as I think did, but truly – it was unforgettable, and I’d recommend it heartily to anyone at all!

As for sights to see, I know you can grab any guidebook and figure out that you should see the Blue Mosque, Hagia Sophia and Sultanamahet Palace. (Tip: At a minimum, short sleeves and long pants or a maxi skirt are required for the Blue Mosque, though they do have cover-ups available to borrow if you forget.) Don’t miss those…but honestly, once you’ve done them, the rest is just wandering and experiencing the city. A few suggestions:

Language, food, culture…I decided I’d figure it out when I got there. The part I really wanted to research before I left – surprise, surprise – was the shopping. I wanted to know what souvenirs to buy, and where to buy them. But there’s surprisingly little information out there about that, as it turns out. So, I did some legwork (and wallet work). Here’s what I learned:

Grand Bazaar: Truly an experience not to be missed. It’s a miles-long maze of shops that’s unlike anything I’ve ever experienced – like the souks in Morocco, but even larger. A few rules and regulations: 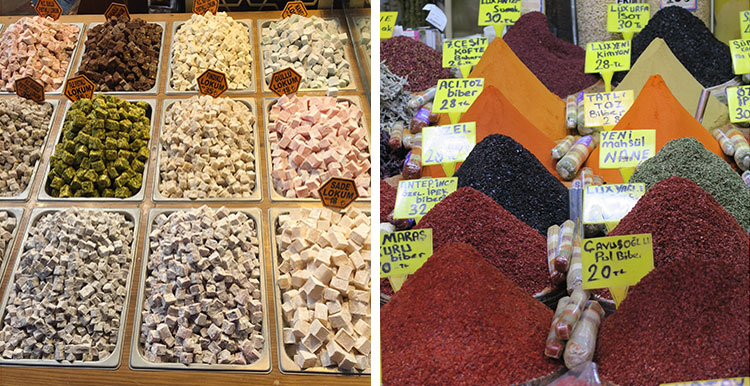 Spice Bazaar: I loved this even more than the Grand Bazaar – the visual of all of those beautiful baskets of spices, the Turkish Delight piled to the ceiling, the perfume of peppers and saffron in the air – it’s unmissable. Wander, sniff, banter with the salespeople, and definitely buy a few unusual spices to take home, but watch the quantities they put into bags for you – do you really need a kilo of dried oregano? Also, please don’t let your tour guide take you to “their favorite” stall. They’re all great – remember, these are food products, so you can taste and smell and know right away what’s good. If you go with your guide, you won’t feel as comfortable bargaining – which is how you end up leaving with $300 worth of Turkish Delight. (*cough*)

Carpets: If you make it through Istanbul without shopping for carpets, please tell me how you managed it. There are 3 rug stores to a block, at least. Strangers will walk up to you during lunch and ask if you’d like to buy a carpet. (Tip: try not to get irritated when that happens – everyone’s got to make a living. I ended up telling them I’d already bought two that morning and had no money left, which made them laugh.)

That said, if a rug is something you’d at all be interested in, it’s an incredible experience. And the rug stores all ship your purchase home for free – the shipping fees are subsidized by the Turkish government.

Based on some recommendations, I ended up at a incredible (and incredibly overwhelming) shop called Ottomania, where I spent more on a rug than I care to admit, but had maybe the most fun of the entire trip. Now, when I say overwhelming, I’m talking about a 6-story building filled floor to ceiling with carpets. Ziya and his team must have showed me more than a hundred options before I ended up – of course – buying the first one I’d seen, a beautiful 19th-century Kurdish dowry rug (you can see it in the video, at the bottom of the stack, as well as a few cameos of my maxiskirt and I pacing indecisively). After we bought, he insisted we stay for lunch, and served us the best meal we had the entire trip, all on his rooftop terrace overlooking the Blue Mosque.

When I told Ziya I’d be including him in my guide, he asked me to share his cell phone number so you all could call him and he’d help you arrange tour guides and other fun things in Istanbul. I’m not going to do that, but definitely ask for Ziya if you go, and tell him he’d better give you a price as good as the one he gave me. And if you want his cell phone number, email me.

Here’s what you need to know about carpet-buying:

The recap: My favorite souvenirs from the trip? The rug, of course. A small handmade copper Turkish coffee pot and a handpainted serving platter I picked up at a student art festival we happened upon, where students were selling the pieces they’d made in class. Piles and piles of spices and teas. And though it’s cheesy, I still wish I’d bought one of those sets of Turkish coffee cups you’ll see stacked mile-high in the Grand Bazaar.

The one thing I didn’t buy, which I really regret, is jewelry. It’s one of my go-to souvenirs whenever I travel, and I was really looking forward to finding some special piece to remind me of my time in Turkey. However, when I got there, I realized that I have a very unreliable track record when it comes to telling real from fake. I can spot a faux Birkin at a thousand paces, but this very morning, I spent several minutes gushing over my barista’s “vintage diamond ring”, only to find out she bought it at Stella and Dot. So, much as I loved the antique emerald and diamond drop earrings I found at the Grand Bazaar, the idea of spending thousands of dollars on something I couldn’t in any way authenticate seemed like a bad plan.

So, my friends…that’s the tale! I hope you had some fun, learned a couple of things, and added Istanbul to your travel bucket list, if it wasn’t there already. If you go, or want to go, and have any questions at all, leave them in the comments – I’m always happy to be your Istanbul shopping tour guide!

{PS: A few shoutouts. First, Turkish Airlines – they’ve ruined me for every other airline on the planet. If ever you get a chance to fly with them, absolutely do it – the experience is not to be believed. Second, if you need a place to stay in Istanbul, I heartily recommend the Ottoman Hotel Imperial. The staff was incredibly kind and helpful, the rooms were charming and large, the rates are unbelievable and the location truly cannot be beat. And nope, no media special treatment from either of these – just genuinely liked them.}