January never fails to make a bookworm out of me. I read like a fiend all summer, but then fall hits and I’m in a shopping frenzy until after the holidays. But January…oh, there’s just nothing like a storm outside and a cup of tea inside to convince me that my Sunday afternoon is best spent curled up on the couch with a new novel.

And luckily, I have so many goodies on my list this month! 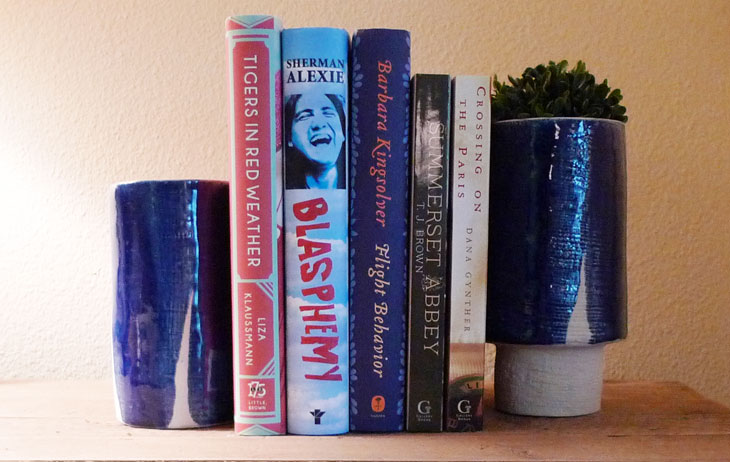 I’m nearly done with Barbara Kingsolver’s latest, Flight Behavior (Harper), about a huge colony of migratory butterflies descending on a forest about to be logged by its owners. As with most of her books, the physical surroundings of the story have become as much a character in the book as any person. This is one of the first books I’ve read in ages when I could say I genuinely have no idea where or how it will end. I’m also a little bit in love with the setting, a modern rural town in the South – it’s practically a foreign country, but it’s giving me perspective to spare.

If you’re Downton Abbey-obsessed (and if you’re not, you should be), pick up T.J. Brown’s Summerset Abbey (Gallery Books) right away – you’re going to need it when Season 3 ends. Tracking three sisters’ lives in the 1910s, with plenty of that Upstairs-Downstairs drama we all love, it’s the perfect stand-in when you just can’t wait for next Sunday’s episode. When you get to the last nail-biting page, don’t fear – the second installment in the series is due out in March.

If you need more historical fiction goodness, you’ll find it from Dana Gynther’s Crossing on the Paris (Gallery Books), which follows three women of different classes as they travel on a Titanic-era ocean liner from Paris to the United States. I picked this one up to thumb through it, and found myself three chapters in before I knew what had happened. Always a good sign!

Next on my list? Tigers in Red Weather by Liza Klaussmann (Little, Brown), set in 1950s New England, has a definite F. Scott Fitzgerald feel, those world-weary, put-upon heroines I love to hate (Anna Karenina, I’m looking at you) and what promise to be some exciting plot twists ahead. And just when I decide it’s time to read something of substance, I have Sherman Alexie’s new collection of short stories, Blasphemy (Grove Press), to rely on. Alexie writes largely about modern Native American life, which puts him in a category almost entirely by himself. But he manages to be honest, heartbreaking and funny all at the same time – and his writing is brilliant. I can’t wait to get started on this one.

What are you reading this soggy January? Any suggestions for what should be next on my list?

One thought on “must reads: january”