When my newest sponsor reached out and told me they were SMC fans, my head nearly split open. They’re fans of mine? You see, I’ve been an Eberjey fan for…well, forever. I think they do a better job than just about anyone of making lingerie and sleepwear that’s sexy and feels amazing to wear. Not an easy feat. Every one of their pieces is a head-turner for the boudoir, and built to actually be worn (for more than the roughly 5 minutes most of us spend in the exotic stuff). 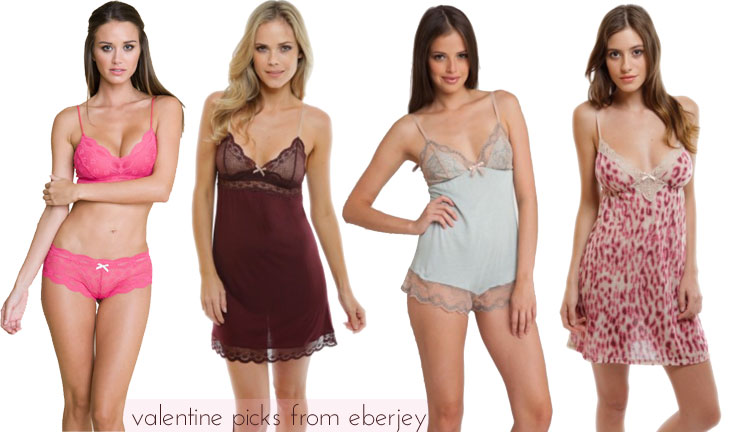 You guys. All of those sexy little numbers? Made of jersey. Stretch jersey. He’ll never even know you’re not miserably uncomfortable!

With Valentine’s Day coming, I’ve said it before and I’ll say it again: Men don’t want flowers or chocolates, which makes gifting for V-Day tricky. But buy your man lingerie (for you, obviously…this isn’t that kind of site), and he’ll be putty in your hands. Plus, you’ll have something new and pretty to make you feel sexy. Everybody wins.

And if you’re spending the day solo (as I am this year…sniff!), you definitely need some of Eberjey’s amazingly comfy pajamas to wear for your Bridget Jones marathon. Which reminds me…I may need a second pair. You know it’s a testament when I put on my new Gisele PJs, and my hubs immediately asked where he could buy me another set. Can I get an “Amen”?

Show my friends at Eberjey some love, won’t you? With goodies this gorgeous, it should be easy to do!