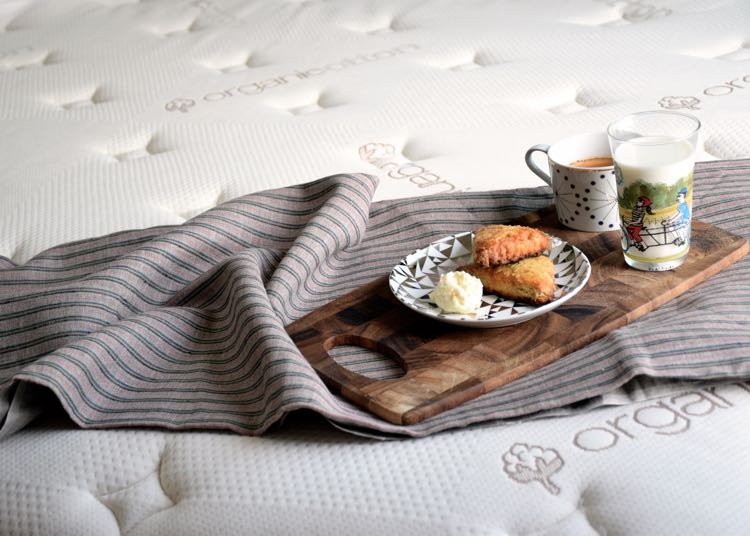 | My Loom & Leaf mattress posing with my world-famous ginger scones. How much do I love those glasses? Quite a lot. |

As most of you know by now, I have a few little health glitches to deal with from time to time. (Said the girl currently rocking a case of hives that would make the Elephant Man hightail it to the nearest exit.) Anyway, the latest in this Lifetime miniseries is a star-studded cast of inflammatory hijinks which generally add up to a pretty uncomfortable life more often than not. Joints spontaneously swell, muscles ache despite my total aversion to physical activity, and pain pops up in the most random of places (who in the world gets sore toes, for Pete’s sake?).

A few months ago, I started noticing that things were remarkably, undeniably worse when I first woke up in the morning. Initially, I blamed it on my pain meds…how dare they wear off! But slowly, I came to terms with the fact that it might be my mattress.

Now I loved my mattress, as you might remember. But my body was telling me that a change was needed – and frankly, it was pretty darn insistent. After striking out at roughly 17 mattress stores and testing just about every other mattress in creation (including those hideously expensive Sleep Number numbers), I called my friends at Saatva and told them my woes. And can I just say, they were so unbelievably kind about the whole thing! So kind, in fact, that they said, “Hey, can we send you our new Loom & Leaf memory foam mattress to try instead?”

Tempting, right? And yet, I was hesitant. Not just because in general I was skeptical of the whole ‘foam mattress’ thing (though that’s true too), but because I had actually already tried a foam mattress from another company. Which, careful observers will note, did not get reviewed here. There was nothing wrong with that mattress at all, for the record. It was fine…just not for me. (And PS, nothing more awkward than the conversation you have to have with a brand when you don’t love their product.)

Given that, when Saatva suggested I try Loom & Leaf, I was wary. But, I read up on what they’re doing, and as usual, they’re miles ahead of the pack. I saw that they’d made several key improvements no other foam mattress brand has figured out. A few different firmness levels to choose from, for one. Thicker mattresses, which are key for me. And a mix of different foams, so it’s not too quicksand-y (if you’ve ever slept on one of the original Tempurpedics, you’ll know what I mean by that). Also, not being dropped at my front door in a giant, fume-filled box, but instead being brought in, unpacked and installed by two friendly men with actual white gloves was a major plus.

So, given all of that, I decided to give my friends the benefit of the doubt and give Loom & Leaf a test drive. (After issuing a pretty severe warning that it was entirely possible – likely, even – that I’d hate it and make them come pick it up. “Not a problem at all!”, they cheerfully said. Seriously, seriously nice people at Saatva.)

The big thing to know here is that foam mattresses take some getting used to. Those of us who have been sleeping on innersprings since birth will wonder what the hell is happening at first. The biggest difference is that there’s no bounce. No playing trampoline on a foam mattress, friends – I’ve tried. Instead, you just lie down and sort of…float. Think of it as choosing a hammock over an air mattress. Instead of your body weight having to force down the padding, a foam mattress just sort of gently melds to your form, making room for your butt or your shoulder or whatever.

To be honest, I do miss the bounce a tiny little bit. But. The tradeoff is that I’m sleeping better, since no bounce means considerably less motion transfer (a certain spouse of mine likes to practice his Rockettes audition routine while sleeping). That’s great and all, but here’s why ditching the bounce is totally, 110% worth it to me: My body doesn’t hurt any more when I wake up in the morning.

I can’t explain it. Maybe the foam is better for side sleepers (which I happen to be) since it supports your body more evenly than all of those springs. Or maybe the foam has actual magical powers. I have no idea. Whatever the reason, I was waking up most mornings on the verge of tears, friends. And now I’m not. So…something’s working. And honestly, that’s pretty much the best endorsement I could ever write.

(PS: Since we just talked about this whole “bloggers getting things for free” business, let me just say that yes, Loom & Leaf sent me a mattress. And I’m super grateful. But given the fact that I kicked one of their competitors to the curb, I hope you’ll believe me when I say I’d have had no hesitation about doing the same thing again if I hadn’t genuinely liked this mattress.)

6 comments on “a good night’s sleep”