i absolutely love the look of this dries van noten blazer from the august issue of vogue, but at $1,300, it’s unlikely i’ll ever even see it in person, let alone own it.  but ever since i spotted it, i can’t help wondering just how hard it would be to recreate on a budget. 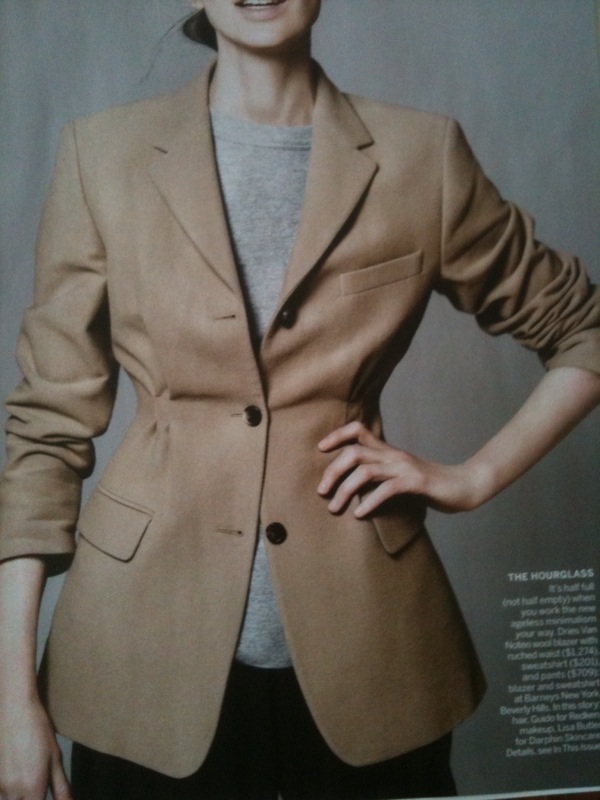 i’m envisioning a thrifted (or otherwise cheaply obtained) camel or tweed blazer (i found dozens on etsy), maybe a size or two larger than you’d normally wear.  take it to your trusty tailor, along with this photo, and just ask for three exaggerated accordion pleats on either side, right above the pockets, to create that sharp definition at the narrowest part of your waist (you’ll want a larger size jacket to allow for space to create those pleats).

you’ll also probably want the shoulders taken in just a bit, and maybe even need the sleeves narrowed a bit – since the rest of the jacket was purposely too large, you’ll want those sleeves trimmed up to fit you properly.  and, assuming it’s an old-style, two-button blazer, feel free to have her add a third button and buttonhole to make it a perfect three-button blazer.

it’s major reconstructive surgery, i’ll grant you, but i think you could get it done for $50-75 (much cheaper if you don’t need the shoulder/sleeve work done).  add on the $25 you spent for the blazer in the first place, and you have a serious style fix for under $100 (original will set you back nearly $1,300).  not bad when you consider the thousand ways you’ll find to wear your creation.

now to nab that slouchy grey sweater underneath…