I have some sort of problem with inverse laws. I fall for trends just as they’re going out of style. I crave Christmas in August, but eschew it in December. And, while most normal people hole up in their kitchens and start to cook when the weather is cold and they’re seeking comfort, I wait until the dead of summer to start brewing up soups, casseroles and – most recently – pies. It’s inexplicable, really.

But, it also means I’ve been enjoying a few really exceptional cookbooks lately….and I had to share. 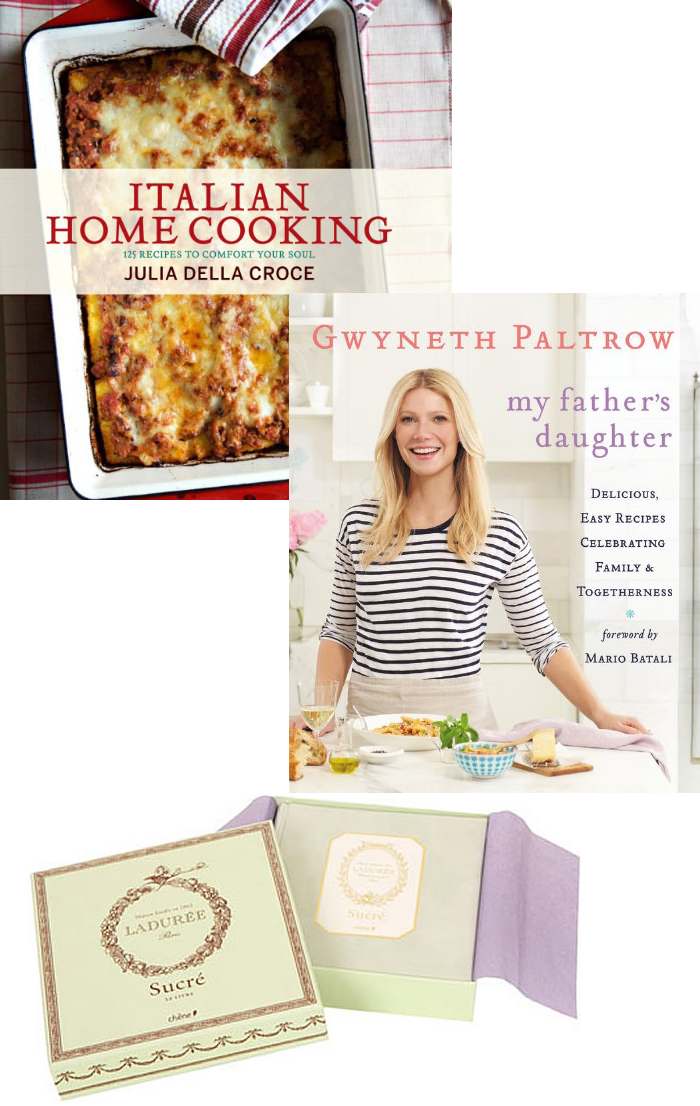 Italian Home Cooking, by Julia Della Croce, is one of my new favorites. It’s packed with recipes that are comforting, delicious, inventive and easy (often not even requiring a trip to the store). Right now, I’m particularly obsessed with her Oven-Fried Chicken and Winter Squash Stew (involving fresh pumpkin, an ingredient that’s not exactly easy to find in August). The chicken, at least, isn’t entirely unseasonal. It would make for an amazing summer picnic, if I can ever drag the hubs out into a park for 20 consecutive minutes.

Everyone and their monkey is talking about Gwyneth Paltrow’s cookbook, My Father’s Daughter, and being pleasantly surprised by its non-pretentiousness (and its excellent recipes). I’m going to add to the chorus, though I can’t say it’s entirely lacking in pretension. The way I see it, that’s all part of Gwyneth’s charm. Again, easy recipes, most of which have vegetarian versions – which matters not a lick to me, though I like that she gives you the option to make a traditional dish veg-friendly without insisting upon it. I also love that she has both regular and “healthy” versions of a few baked treats…again, no arm-twisting, it’s just an option. If you’re after a method for eating just a smidge healthier, with only a mild amount of preaching, it’s a great choice. No, I won’t be making any homemade sriracha, but I love the hefty chapter on soups, and I’m looking forward to trying her dad’s pancake recipe. I may even try the Perfect Roasted Chinese Duck, which Mario Batali says is amazing.

Now that I gave you my token “healthy” cookbook, let’s follow that up with some utter decadence, shall we? Did you know that Ladurée has a cookbook? Did you know it comes in a box just like the one they use for their famous macarons? Packed in lavender tissue paper and with a pale green suede on the cover, no less. The recipes in Ladurée Sucré are probably more for admiration than execution – even a simple recipe for gingerbread cake allegedly takes 3 days to make. But if you’re a bakery nut like I am, you’ll spend hours poring over the photos and deciding what you’d make, in a fictional world in which you had a commercial kitchen and a sous chef.

What have you been cooking up this summer?