We are painfully overdue for a Must Reads, aren’t we? If I’m honest, it’s because the last few books I’ve read haven’t done much for me (and in some cases have been downright infuriating. Did anyone else read The Wind-Up Bird Chronicle?!). But I’m pleased to tell you that I’m back on a literary high streak – a few of my favorites this month: spring 2014 books 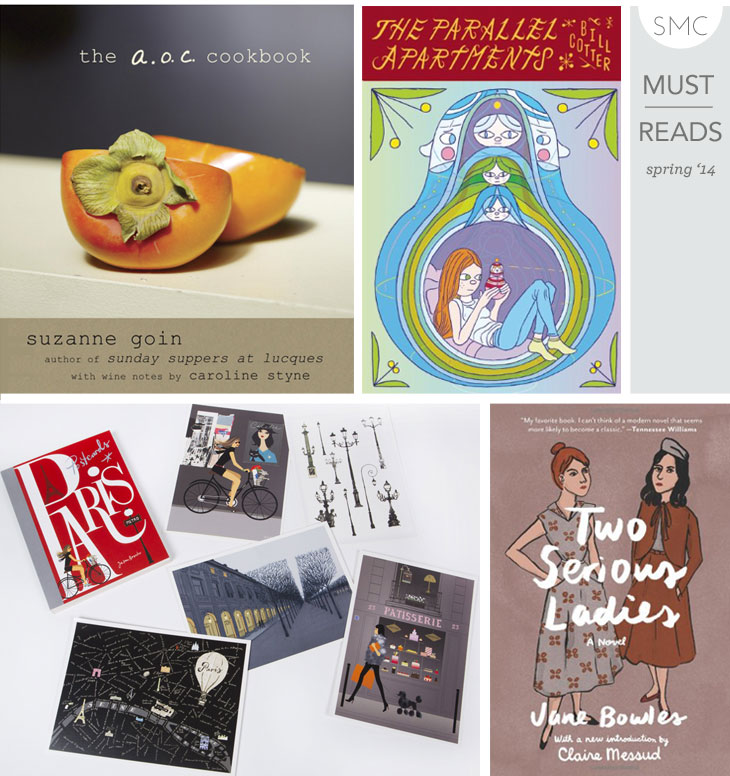 To eat: I saw Suzanne Goin’s recipe for Lamb Meatballs with Spiced Tomato Sauce in the NY Times not long ago, and knew I had to make it for dinner that night. After wiping the last bit of sauce from my chin, I ordered The AOC Cookbook immediately. The recipe was simple and straightforward, but the flavors were complex and utterly unlike anything I’d cooked (or eaten) before. My biggest problem now is deciding what to make next: the Frozen Meyer Lemon Meringue Pie with Gingersnap Crust or the Pork Cheeks with Cavolo Nero (kale) and Polenta. This is one of those read-like-a-novel cookbooks, so prepare to settle in. And if I haven’t convinced you yet, let me say this: there is a 57-page cheese glossary in the back. Suzanne and I are soulmates, I think. | The AOC Cookbook, by Suzanne Goin (Knopf)

To ogle: I thought by now I’d have all the Paris out of my system. But this book of Paris Postcards arrived, and I found myself on Kayak pricing tickets, like I’d been hypnotized by some Paris spell (I blame the sparkly lights on the Eiffel Tower). Jason Brooks does the most wonderful job of capturing the city (see eg, Paris Sketchbook)…each drawing is so quintessentially Paris, but still original – he focuses on capturing moments, rather than sights. Obviously, I can’t go back (yet). But I can flip through this book over and over again, consider framing a quartet of them, and send the rest to my friends. Maybe I can incite a 2015 girls’ trip to the City of Lights! | Paris Postcards, by Jason Brooks (Laurence King)

To read obsessively: McSweeney’s authors never fail to deliver on shock value – with Dave Eggers at the helm, it’s no wonder. But The Parallel Apartments (Bill Cotter) is a jaw-dropper even from them. I can’t even begin to describe this one, except to say this: Read the first line. Maybe the first two pages. You’ll either be completely sucked in, or completely repulsed. I was the former. But I suspect even if you’re the latter, you’ll be thinking about those two pages for a few days, at least…which is what a really good book is supposed to do, isn’t it? | The Parallel Apartments, by Bill Cotter (McSweeney’s)

To read a few pages at a time: Two Serious Ladies is not new. In fact, it’s practically a “modern classic” (or so says Tennessee Williams on the cover), but it was just re-released in paperback by Ecco, with a new introduction by Claire Messud, who is one of my favorite modern authors (don’t read her intro until the end, though…spoilers galore). Published in 1943, it is the only novel by Jane Bowles, a literary mystery figure you’ve probably never heard of (but worth Googling if you’re into lit history lore). Two Serious Ladies is…well, it’s a portrait of oddities. Oddball women being oddballs, doing and saying things you can’t quite believe are happening. You want to give up on these women, but – like Madame Bovary and Anna Karenina before them – they sneak up on you, and you find yourself sympathizing with the crazy. It’s a light, easy read with plenty of zingy one-liners to repeat to your significant other when the moment strikes. | Two Serious Ladies, by Jane Bowles (Ecco)

What are you reading, friends? I’d love some recommendations!